by Adebisi Oluwaseun
in Basketball, News
399 8
0

SAN FRANCISCO — Chase Center was at a fever pitch. The Golden State Warriors, particularly their dazzling guards, were putting on a scoring clinic. They had extended their lead over the defending champion Milwaukee Bucks to 20 points just a few minutes after halftime, and the sweet fragrance of a blowout victory was growing more and more pungent. Nothing too out of the ordinary, if you’ve watched the Warriors’ devastating third-quarter runs over the years. Oh yeah, except for one thing. 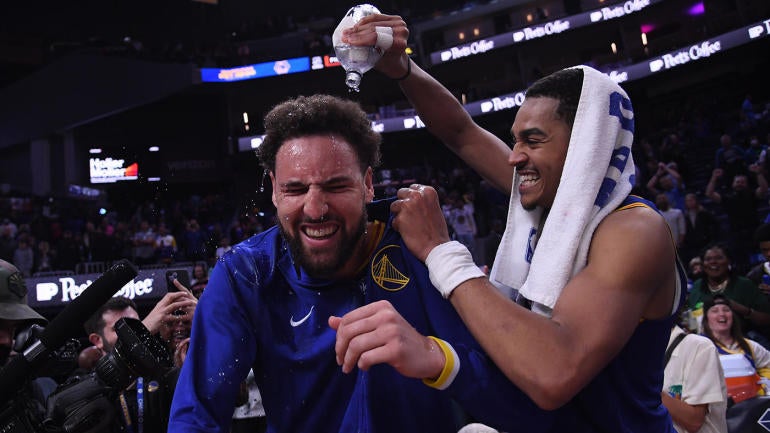 Stephen Curry had five points at the time.

The aforementioned spectacular guard performances came from Klay Thompson, who finished with a season-high 38 points on 8-for-14 3-point shooting, and Jordan Poole, whose 30 points and five 3-pointers were as electric as anything the building has seen this season. Warriors head coach Steve Kerr started the three guards together for the first time all season, citing the trio’s excellent synergy and the premonition that the Bucks would defend Curry aggressively. He was right.

When all was said and done, the Warriors came away with a convincing 122-109 win over the Bucks on Saturday, despite Curry putting up the stat line of a high-end backup point guard: eight points, eight assists and seven shots.

“It’s crazy when the MVP only has eight points and we still win against a really, really, really good team,” Poole said after the game. “It’s just a testament to the guys out there on the court, the coaching staff, our entire team. It’s very rare for Steph to only have eight points, so we’ve just got to learn from it, grow and continue to ride this momentum.”

That kind of non-Steph production was what the Warriors were missing when they went 2-9 over a recent month-long stretch, and it’s what they’ve gotten during their current three-game winning streak. The Warriors need Thompson or Poole to play well to help take the pressure off of Curry. When Thompson and Poole both have great games, well, we see what happens. Golden State dominates while Curry gets a rare respite when he doesn’t have to don the superhero cape for the majority of the evening.

It requires a special kind of superstar to limit himself to seven shots in any game — let alone a nationally televised prime-time matchup against the defending champs. But, as we’ve seen over the years, Curry has no problem directing the spotlight towards his teammates, particularly when he faces an aggressive, blitzing defense such as the like that the Bucks threw at him on Saturday.

“I thought Steph was perfectly patient tonight in recognizing what the defense was doing and just getting the ball out of his hands,” Kerr said. “With Jordan having that kind of space, given what the defense was doing with Steph, getting that extra playmaker out there early opened up the floor and both Jordan and Klay got going. If they’re gonna commit two to Steph and those guys are going, it’s gonna be tough to defend.”

Poole has been simply fantastic for the past six games, averaging almost 25 points while making 60 percent of his field goals and 57 percent of his 3-pointers. Thompson’s eruptions have been more sporadic, and that made Saturday night’s vintage showing all the more entertaining.

“I’m not happy with how I was shooting, but I know these nights are within me,” said Thompson, who received an extended hug from the injured Draymond Green when he checked out of the game to a rousing ovation late in the fourth quarter. “I’ve been in this league for so long and done too many great things that a lot of players haven’t done before to doubt myself. I was eager for a night like this, but a mid-season shooting slump, I mean, it’s not gonna kill my ego.”

Thompson, who knows a thing or two about showing up for big games, refused to let his team flounder in a litmus test against a relatively healthy Milwaukee squad that had won six straight games. With the Warriors trailing by six coming out of a timeout in the second quarter, Thompson hit three 3-pointers in four possessions to give Golden State a three-point lead. After the Warriors’ barrage early in the the third quarter, the Bucks cut the lead to 12 with four minutes left in the frame. Thompson, who had just checked back into the game, made another 3-pointer on his first possession, extending the lead to 15.

When Golden State needed a big shot on Saturday night, it was Thompson who delivered.

“I’m sure it’s a relief. He’s so hard on himself and wants so badly to succeed,” Kerr said of Thompson. “I thought over the past few games he’s been taking tough ones early, which has kept him from getting into a rhythm. Tonight it felt like he was taking better shots early, cleaner looks. And you know Klay. Once a couple of them go in, then the tougher ones get a lot easier for him.”

Playing Curry, Thompson and Poole together only works if there is significant buy-in and effort on the defensive end, as there was on Saturday night. Kerr noted Poole’s improvement and increased commitment on that end of the floor, and Kevon Looney continues to be the rock in the middle that makes it all work. He guarded two-time MVP Giannis Antetokounmpo for much of the evening, and while the Greek Freak finished with 31 points, he had just five points and one rebound in the first quarter as Looney set the tone defensively.

“[Looney] just went from guarding [Nikola] Jokic to Giannis [Antetokounmpo] and doing a great job, in my mind,” Thompson said after the game. “Those are two MVP players.  For Loon to embrace that, it just tells you how selfless he is. He’s out there doing all the little things that help us win.”

The days of starting three guards could be numbered soon, with Green expected to return for Monday’s game against the Washington Wizards and Kerr’s consistent affinity for keeping Looney in the first unit for defensive purposes. But a lineup of Curry, Poole, Thompson, Green and Andrew Wiggins might be the Warriors’ finishing lineup from now on — the latest, slightly less intimidating incarnation of the small-ball “death” lineups the Warriors have presented in crunch time over the years.

We’ve yet to see the lineup in action because Green and Thompson haven’t played together in over two years. On the night of Thompson’s return earlier this season, Green ceremonially took the court for the opening tip and then checked out of the game due what he thought was a calf injury. It turned out to be the back issue that has kept him out of the team’s past 30 games.

If Green can get back to the Defensive Player of the Year favorite that he was before the injury, as Thompson and Poole are coming into their own, the Warriors become one of the more intimidating title contenders in the Western Conference.

“To get out of the funk that we were in, kind of scrape by against the Clippers and Denver, and then have a complete performance like we did tonight — it feels like us again,” Kerr said. “It’s a great sign, but we’ve gotta keep doing it.”