The Boston Celtics’ Marcus Smart said he would never intentionally hurt another player after a collision with the Golden State Warriors star Stephen Curry in Boston’s 110-88 win.

Smart dived for the ball and crashed into Curry’s leg, with Warriors coach Steve Kerr calling it “dangerous play”. 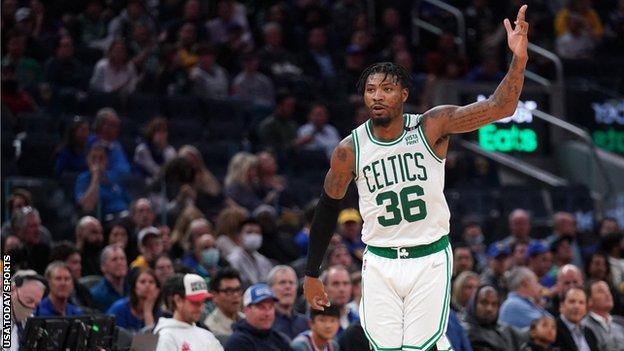 The incident provoked anger on-court and Curry had to limp out of the game.

“I know who I am, my team-mates and my colleagues know I’m not a dirty player,” Smart said.

The incident in the second quarter left Curry needing an MRI scan to assess the damage.

“I thought Marcus dove into Steph’s knee and that’s what I was upset about,” Kerr said after the game.

Kerr said he had discussed the incident with Smart and the pair were “good” but added “I thought it was a dangerous play and I let him know”.

Disagreeing with that assessment, Smart said: “Me and Steve have a relationship from USA basketball so he knows I’m never trying to hurt anybody. I hate to see any injury. I hope Steph’s alright.

“I didn’t even see him, I just dove on the ball and tried to make a play. I’m really down right now about it.

Elsewhere, the Dallas Mavericks ended the Brooklyn Nets’ four-game winning streak thanks to a three-pointer from Spencer Dinwiddie with the final throw of the game to make it 113-111.

The Philadelphia 76ers enjoyed a 118-114 win over the Cleveland Cavaliers, largely thanks to 35 points from Joel Embiid, who was celebrating his 28th birthday.

And Nikola Jokic scored 29 points as the Denver Nuggets’ beat the Washington Wizards 127-109.

Karl Anthony-Towns – who scored the NBA’s season-high 60-points on Monday – was in good form again, scoring another 30 points in the Minnesota Timberwolves’ 124-104 demolition of the Los Angeles Lakers.

There were also wins for the Charlotte Hornets, the New York Knicks, the San Antonio Spurs, the Utah Jazz and the Toronto Raptors.