Phil Mickelson has been one of the most popular professional golfers throughout his long career, having turned professional in 1992.

Mickelson was born in San Diego to parents Phillip Mickelson and Mary Mickelson. His first taste of the sport came from golfing with his father and a grandfather at a young age.

His grandfather, Alfred Santos, worked as a caddie at Pebble Beach. It was as a child that the right-handed Mickelson adopted his famous left-handed swing after mirroring his father on the fairway.

After high school in California, Mickelson attended Arizona State University on a golf scholarship and truly began to emerge as a star on the golf scene. While a member of the Sun Devils? golf team, ?Lefty? became a three-time Haskins Award winner and a three-time NCAA Individual Champion.

For all the success that Mickelson displayed in college, his biggest win in Tempe was meeting his wife.

Phil Mickelson is married to his wife Amy Mickelson, formerly Amy McBride. The couple met in 1992 during their college days at Arizona State, where Phil was a star golfer and Amy was a cheerleader for the NBA?s Phoenix Suns.

When Mickelson introduced himself as a pro golfer, McBride actually thought he meant he worked at the local golf course. She quickly found out that wasn?t the case.

The two spent their first date on a tennis court near campus and hit it off immediately. Fast forward to 1996, and Phil and Amy were married.

Since their marriage the couple have welcomed three children. Their oldest daughter, Amanda, was born one day after Mickelon placed as the runner-up in the 1999 U.S. Open Championship, where he lost to Payne Stewart. In 2001, Phil and Amy announced the birth of their second daughter, Sophia. Two years later, in 2003, the couple had their first son, Evan.

Evan?s birth was extremely difficult, as Amy ruptured an artery in labor and Evan was non-responsive at birth. Ultimately, both Evan and Amy pulled through. 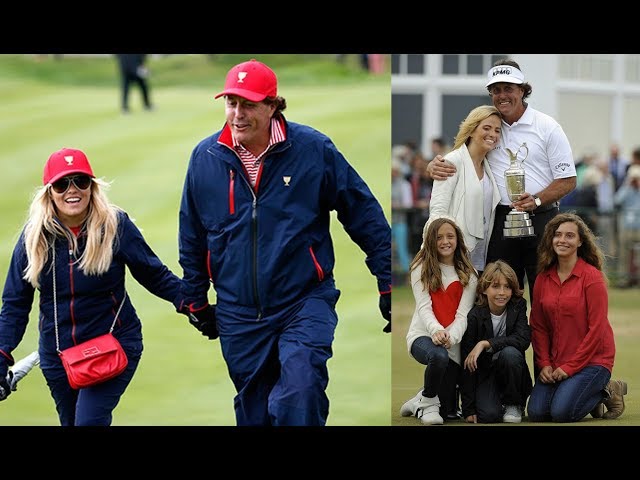 In 2009, Amy Mickelson was diagnosed with breast cancer. She underwent major surgery, multiple sessions of chemotherapy and battled the cancer for 11 months, with Phil standing by her side, having stepped away from the PGA Tour, including events like the Byron Nelson Championship.

After beating cancer and being given a clean bill of health, Amy and the Mickelson family have been active in supporting awareness for breast cancer and fighting against it.

Amy returned to the public scene for the 2010 Masters Tournament, and though she didn’t attend the first, second, or third round, she and her children stood by Phil?s side on the final day when he won his third green jacket on the 18th green at Augusta National Golf Club. 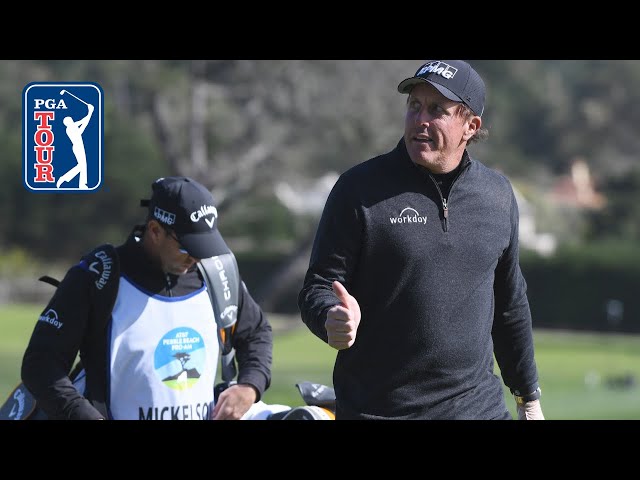 With Amy by his side, golfer Phil Mickelson took the PGA Tour by storm after turning pro in 1992. He hired Jim ?Bones? Mackay as his caddie. While Mickelson collected some victories on the Tour as a youngster, “Lefty” failed to win a major throughout his first 13 years participating in tour events.

Finally, in 2004, Mickelson took the top prize in a major championship for the first time at The Masters. He nailed down the win with a long putt in the final round, fending off Ernie Els, who finished one stroke behind.

Following his first win in 2004, Mickelson’s career truly took off. In 2005, Mickelson won his second major championship, the PGA Championship at Baltusrol. He snatched an impressive birdie on the 18th hole to secure victory.

That same year, Mickelson was dropped by his sponsor Titleist after he was found having praised Callaway’s golf clubs in a voicemail. Titleist dropped Phil, but he was quickly picked up by Callaway.

Unfortunately, Mickelson struggled at the 2004 Ryder Cup, which many people attributed to his equipment change.

“Lefty” would win his third championship and second Masters in 2006, which resulted in him catapulting to No. 2 on the Official World Golf Ranking.

Throughout his career, Phil has accumulated 53 professional wins, including 44 PGA Tour wins. Mickelson also boasts a plethora of international victories, including 10 wins at the Presidents Cup. He was inducted into the World Golf Hall of Fame in 2012.

Mickelson took home victory in the highly-publicized golf tournament, CBS’ The Match, which pitted “Lefty” up against Tiger Woods in a best-of-18 event in Las Vegas. Mickelson required four playoff holes to take down Woods.

Mickelson and his wife Amy have been married almost 25 years and have journeyed through the ups and downs of both Lefty’s professional career and Amy’s health to get to where they are today.