Serena Williams on new fashion line “Serena,” returning to the court with confidence and how motherhood, marriage and the #MeToo movement have affected her. 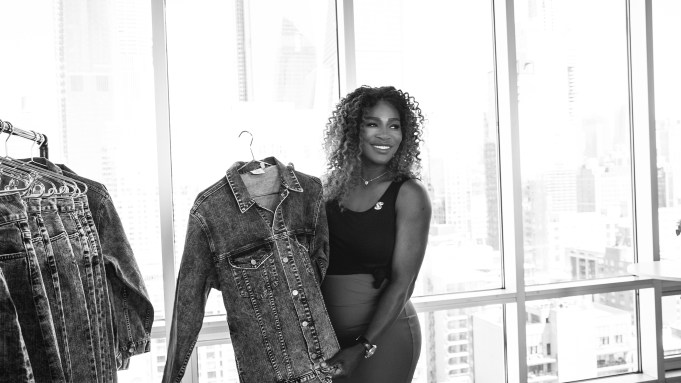 “I am beautiful, I am strong.”

Serena Williams is holding up a track pant from the “motivational” section of her clothing line, which bears the above mantra running down the leg of the trousers.

“This is our ‘friendly reminder’ pant, just in case you forget; if you’re having a tough day, you look down and you’re like, ‘You know what, I got this. I’m strong, I’m beautiful, I got this,’” Williams says. 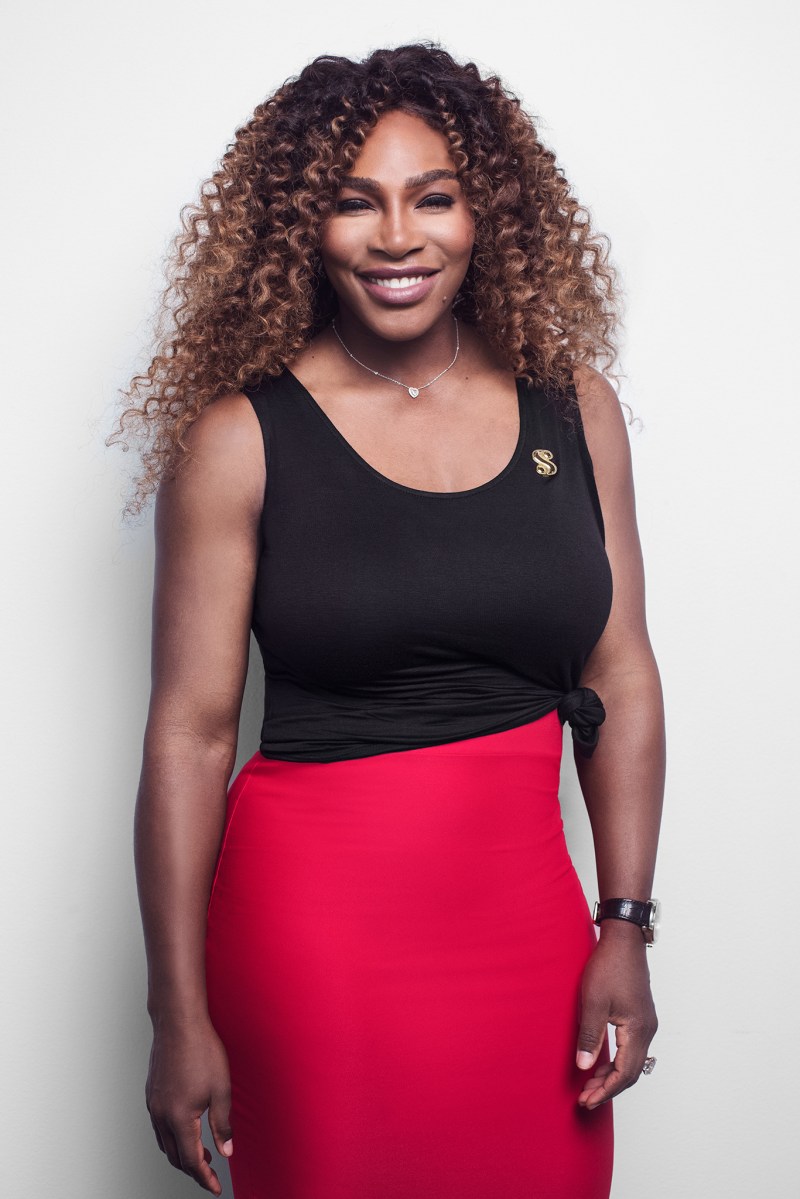 What with some 23 Grand Slam titles — and hoping for a 24th with the start this week of the French Open —  the tennis champion is, it goes without saying, an inspirational figure to many for her athletic dominance. Now she wants to motivate and empower women to feel their best when they get dressed every day, not just to work out.

Anchoring the line are messages of self-love and confidence, both in physical type like the leisure wear pants, and in its fabrics and price points.

And it’s a message she has made for herself more than anyone.

The debut comes at a pivotal moment in Williams’ life; following the September 2017 birth of her daughter, Alexis Olympia Ohanian, she is beginning her return on the tennis courts, at age 36. Her journey has been documented by HBO in “Being Serena,” which gives an intimate look at the woman whose personal brand is now more powerful than ever. 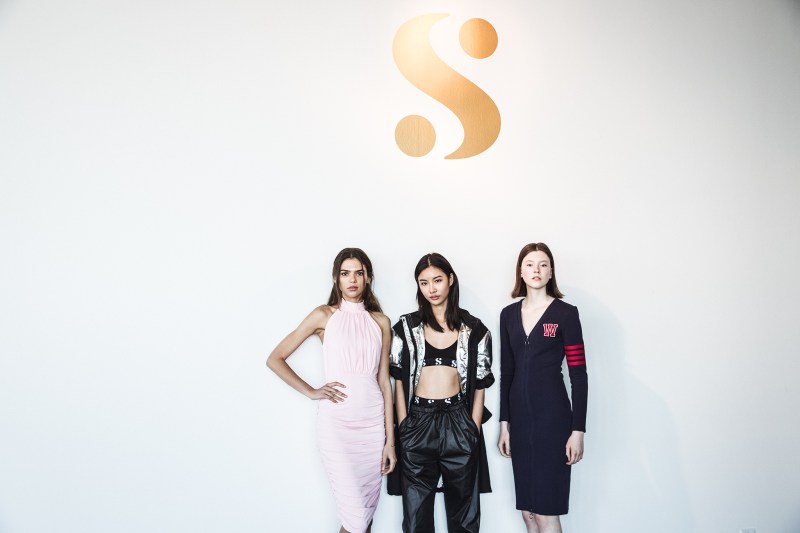 Buoyed by becoming a mother, her marriage to Alexis Ohanian in November, her against-all-odds mission to return to tennis dominance, and, yes, the #MeToo movement, Williams has never been more ready to be at the creative helm of her own line.

“I’ve never been fully creative, so that’s what this is. I’ve always been limited,” Williams says, while snacking on a couch between hosting duties at a recent preview of the collection. “I’ve done things for HSN but I’ve always been limited, with the customer and with the fabric selection; [there were] things I couldn’t do. They gave me so much knowledge, though, and so much practice and so much training. And with Nike, obviously there are so many things I can’t do.” 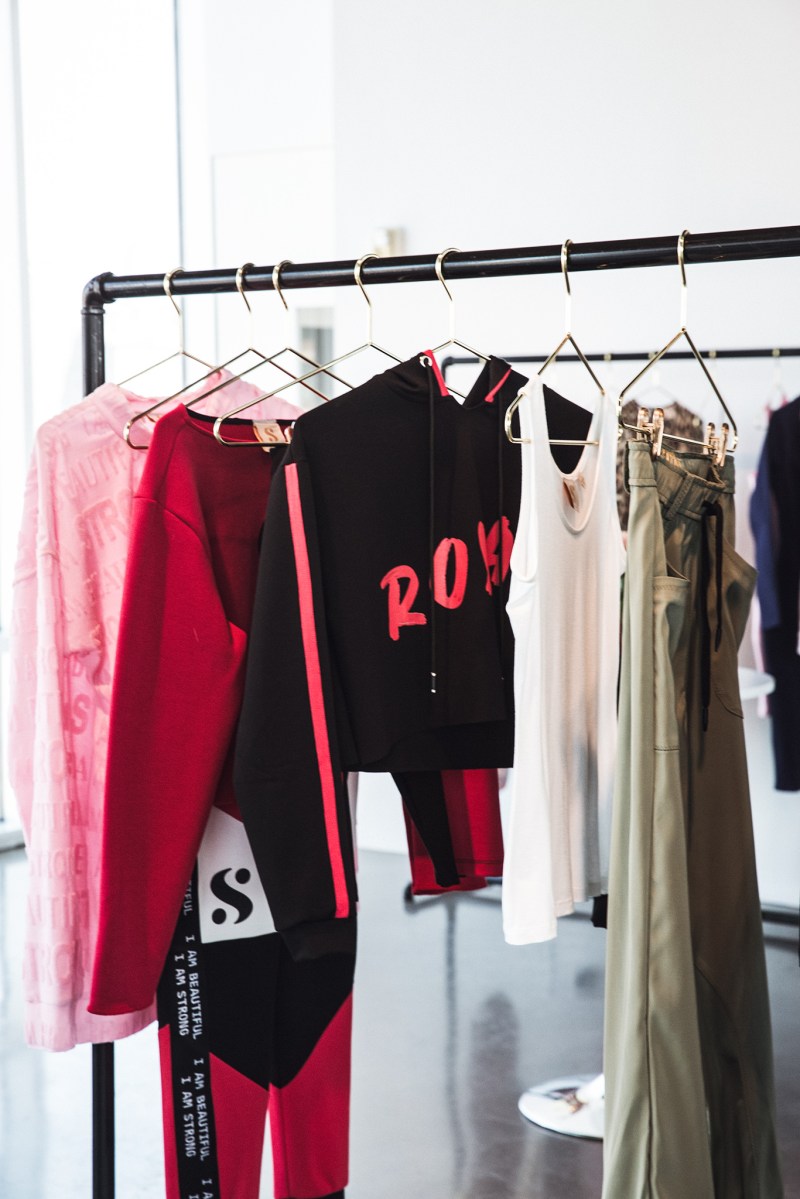 The training with the two conglomerates, coupled with her two years of fashion school at the Art Institute of Fort Lauderdale, give her confidence as a designer.

“This is what I studied. So I was like, ‘I really want to be able to start doing what I want, how I want it, and letting people see my vision in fashion, how I want it to be seen,’” she says.

The line, which is being sold exclusively on her own web site, is centered around practicality. (It is the word she uses most when discussing the collection.) The first drop ranges in price from $35 to $250, and the label is everything from the more expected leisure wear to denim, dresses and blazers. 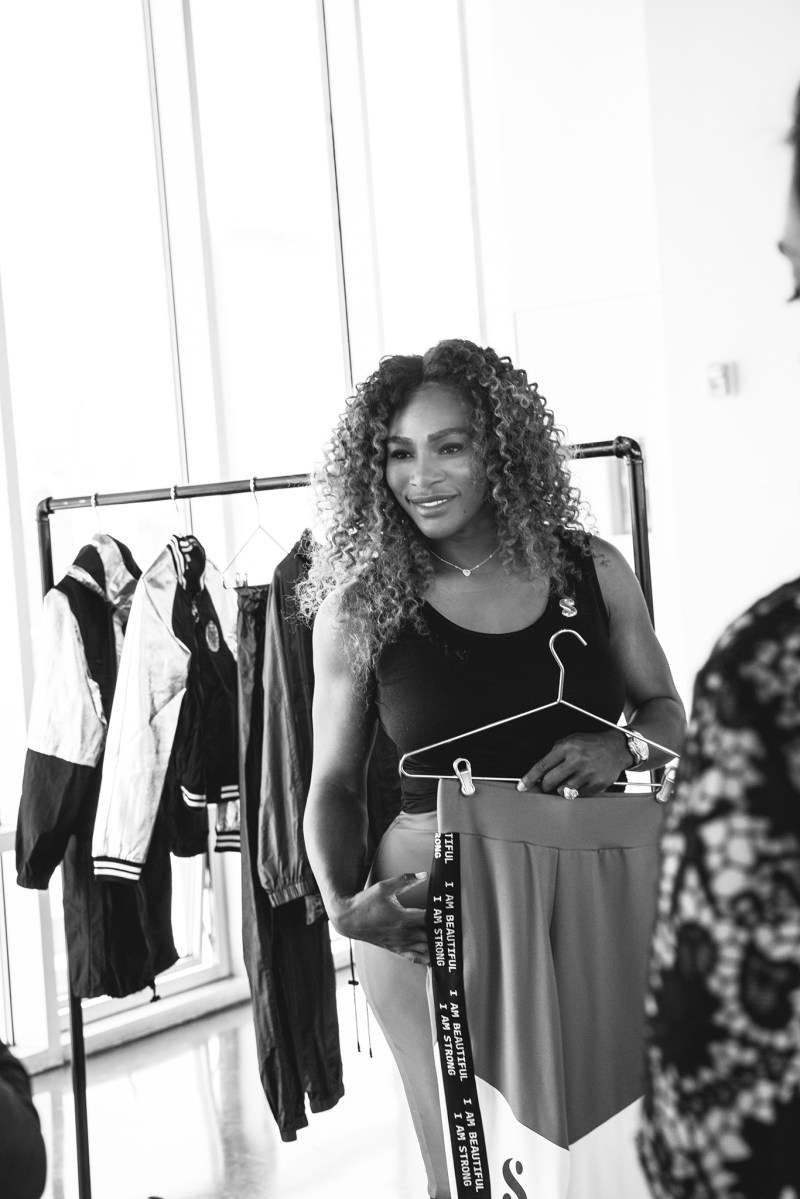 Her woman is also someone who wears leisure wear just as much as they do denim, boardroom blazers and dresses ready for a night out.

“The customer is a girl or a woman who believes in herself, or wants to believe in herself; maybe she’s feeling unconfident that day,” Williams says. “And someone that is unapologetically themselves, and that maybe they stand out; maybe they stand out because they are strong or they’re beautiful or they want to not be the norm. Our woman is someone who looks at fashion as a compass to show who they are, to show what they are.”

The line is centered around the concept of an “s” word — “Serena,” yes, but also a wide-reaching embrace of the “powerful” 19th letter of the alphabet.

“Everyone can have an ‘s’ word. Mine is ‘sure.’ My mom’s is ‘steadfast.’ A really good friend of mine who has been through a lot, her ‘s’ is ‘survivor,’” Williams says.

The idea that someone with the achievements of Williams needs self-assurance is, to mere mortals, rather baffling, but nevertheless, “I need to be sure of myself,” she says.

“This is a huge thing that I’m doing right now and a huge undertaking, and I need to be sure. And sometimes even when I walk out onto the court, I’m not sure, I’m not sure I’m going to win. I need to be more sure of myself and more confident in myself. And that’s coming from me. And I feel a lot of people can relate to that.”

Doing a line of her own has been in the works for over two years, but, “in between there I got pregnant and had a baby, which took a little time, and then I got married, which I needed to spend time on that for,” she says.

Baby Alexis Olympia has only been a touch distracting. “I’m not allowed to talk about her because I get too excited,” she says.

The two-year process of creating the line, and the addition of motherhood and marriage, only encouraged her as a creative.

“Definitely — a lot of stuff changed in there,” she says of how motherhood played into the design process. “We changed some of our silhouettes, we changed some of our pieces; it’s just been an evolving work. Because at one point I was going to come out with it in November before I got married, and I remember thinking, ‘I don’t want to do that because I want to be able to enjoy my honeymoon and enjoy the wedding,’ so we just kept putting it off and changing and adding, and I’m glad we waited.”

Williams brings up the #MeToo movement as an influence on her desire to empower women. Such messages were already present in initial designs, but “I made them stronger,” she says.

There’s an unabashed joy and pride in how she holds up her pieces, finally getting to show off her own work. “I’m like ‘Where are my samples?’ because I need to be in this everyday, all day,” she says, grinning.

Her standouts include a suit jacket of mixed plaid with padded shoulders. “I love a shoulder pad. I put an extra one in for mine to get a real structured, Balmain look,” she says, taking the item off the rack.

Another favorite is a reworked tracksuit, done with flared pants and a bell sleeve.

“I was obsessed with Juicy growing up, so this is my version of that,” she says, describing the look as “a little elevated.” The suit comes in both unadorned black and a version with embroidery at the neckline — “you know, because you have to be serious in these meetings,” she says, referencing her office-ready attire.

She also has a series of dresses, most with ruching (“I wear dresses a lot, if I’m going shopping or I need to pick up something”), sportier bombers and parachute pants, and lots of high-waisted denim, with just enough stretch.

“I got tired of the stretch jeans, as much as I love them. I feel like everywhere I go it’s just ‘stretch stretch.’ What happened to the amazing Levis? I wanted to bring that back,” she says. Hers come with some give, though “very little,” she says. “I can fit in them. It’s enough [stretch] to get on and it fits very well. It brings the integrity of the jean back, and I feel that’s missing right now, in all the jean collections.”

They are pieces inspired by what she believes women want to wear, and what she herself believes is lacking when she shops.

“Again, this is really just about my life,” she says. “I would wear this just hanging out, having fun.”

Two years in, and she’s readier than ever for customers to finally embrace the collection.

“Life is all about timing, right? I just feel now is the right timing,” Williams says. “And with all the movements that are going on with women and young girls standing up and doing marches and talking about #MeToo, and standing up for their own rights — that should be automatically [rights] we have — but enforcing that and saying ‘these are our rights’ — it’s timing.”

All of that mixed with her own life’s path, and here she is, allowing women to get dressed in ways that make them feel empowered, as she makes her return to the court.

“It also happened to be the perfect timing for me.”